Alphabbooks: T is for Tonks!

Getting down to the last few letters. This means it’s becoming slim pickings on Harry Potter characters. I wanted to not use Tonks, based only on the fact that it’s her last name, but, as others pointed out as well, she is primarily known as Tonks in the books.
Tonks is another character I really liked in the books. So much so that I have to admit that I was somewhat disappointed by her in the movies. I had an image in my head that (as much as I like Natalia Tena) looked quite a bit different. That’s not to say she didn’t grow on me, but, well… mine was better.

T is for Tonks: 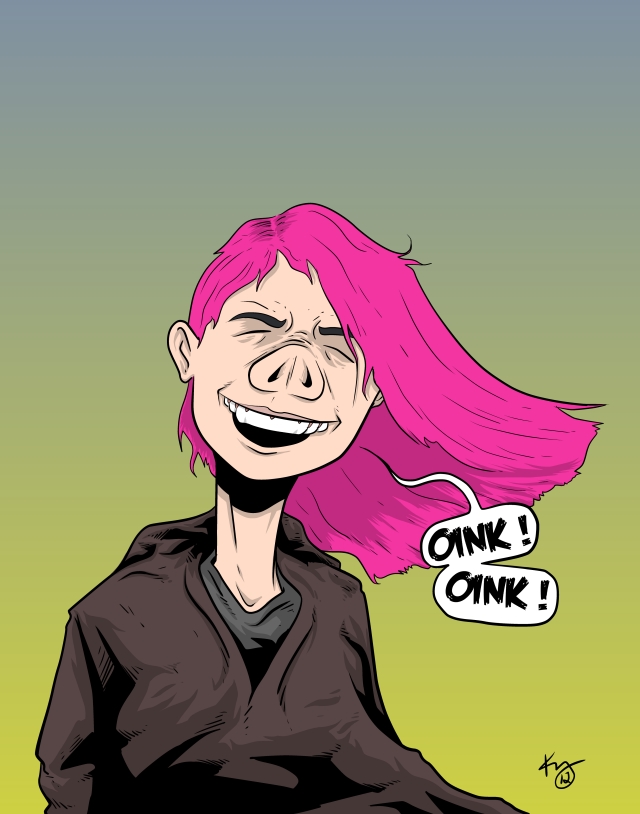 I did this version of her because (A) I liked this part in the books. She introduced a little silliness and fun into a situation during a rather grim time. (B) I think that scene goes a long way to show how fantastic and fun a mother she would have been.

I am a freelance artist that has been drawing comics for about half my life. I try to work in all mediums that I possibly can but love working with a brush and a bottle of ink. If you like what you see here and need an artist for something, drop me a line.
View all posts by treebeerdy →
This entry was posted in alphabeasts, alphabooks, art, Comics, comics by kelly williams, digital art, fantasy, harry potter, manga studio, punk, Sci-Fi, Uncategorized and tagged alphabeasts, alphabooks, art, artistic process, comics, digital, digital art, drawing, drawings, fantasy, fiction, funny, Harry potter, illustration, ink, kelly, kelly williams, manga studio, movies, novels, Nymphadora Lupin, Nymphadora Tonks, pencils, sci-fi, sketches, tonks, treebeerd, williams, writing. Bookmark the permalink.