Well, here we are at the end of Alphabeasts. (well, I still need to throw down an A, but I will get to that soon…) I had a blast and it had so many wonderful artists involved, it was great to be involved! I can see improvements in my own work over the course of this project, fueled by a desire to try and keep changing things up and inspiration from other participants. Heck I’m even coming out of this working on a pretty exciting project with fellow Alphabeaster Christian Sager, not bad if you ask me!
Anyways, I knew from the time I did my D (Dragur) that I would NOT be doing zombie for my Z. I mean, my D was basically a zombie. I also pretty much knew what I would most likely do for Z at that time as well. There is that and the fact that I have drawn the piss outta zombies in my day! I thought I would give friends and followers a break. (Not to mention all the awesome Zombies everyone else is throwing in!! More on that in a second.)
Yesterday when I sat down to do my Alphabeast I kept thinking I should change it because it didn’t feel like it had the pop I wanted to go out on. I liked the drawing though and decided to stick with it. I’ve always been a huge fan of the original Robotech series. If you’ve followed the blog for awhile you probably even seen a couple other Robotech type drawings here and there.
Specifically, I chose Commander Breetai. He was a great character with a lot of depth. He basically defects from his fellow Zentradi and sides with the Micronians (Humans) and winds up fighting along side them and other fellow Zentradi defectors against the other Zentradi. You get the idea.
But wait! there’s more!

When I was thinking about doing something different I started a sketch that I ended up abandoning. I have decided to share this as a final alphabeast as well. Granted it’s kind of a throw away…

Z is also for Zerg: 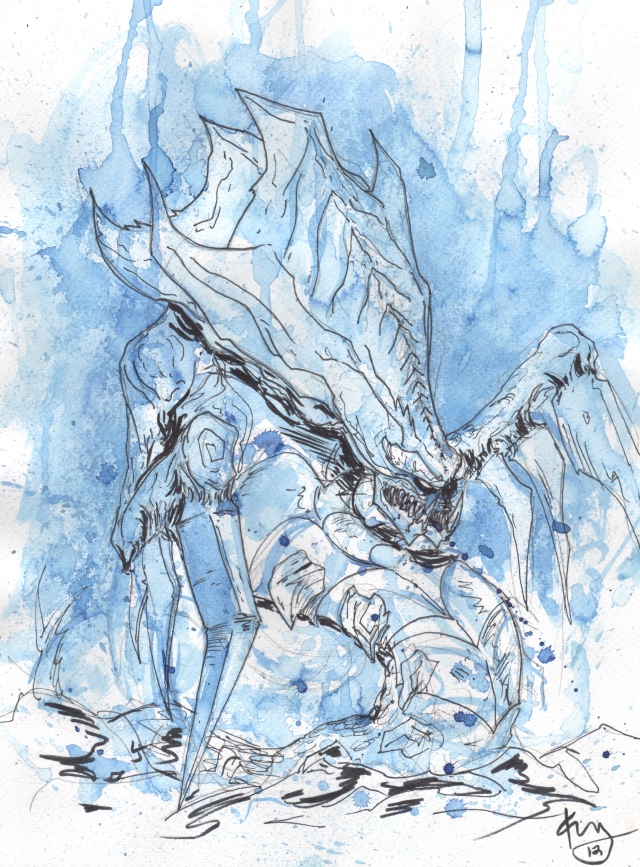 The Zerg are an alien race from the video game series StarCraft From Blizzard Entertainment. I like it as a sketch and may come back to them one day. The only pitfall of doing Zerg was it made me want to just go play Starcraft 2. Which would be a terrible miss-management of my time right now…

So, again I want to thank everyone who was involved in Alphabeasts! As well as a huge thanks to the man who ran the whole thing, Andrew Neal (aka wander lane)! Who, by the way did zombie for his Z installment and included a few of the Alphabeast artists, myself included! it’s pretty awesome too! You should click HERE and go see it!
I hope to have time to be involved in the upcoming AlphaBooks as well! In the meantime, I will post an A soon and will be rolling out news on a couple projects REAL soon!

I am a freelance artist that has been drawing comics for about half my life. I try to work in all mediums that I possibly can but love working with a brush and a bottle of ink. If you like what you see here and need an artist for something, drop me a line.
View all posts by treebeerdy →
This entry was posted in alphabeasts, anime, art, Comics, fantasy, horror, paintings, Sci-Fi, Uncategorized, video games, world of warcraft and tagged 80's cartoons, aliens, alphabeasts, anime, art, artistic process, blizzard, comics, drawing, drawings, fantasy, fiction, illustration, ink, kelly, kelly williams, manga, monsters, pencils, robotech, sci-fi, sketches, starcraft, starcraft2, treebeerd, video games, williams, zentradi, zerg, zerg rush. Bookmark the permalink.