I am a fan of the horror. I will watch crappy B-movies all day and play a goofy scary video game. I will spend a weekend reading horror comics. I don’t spend much time reading horror novels. Mainly because I haven’t found much love for contemporary horror in this format. This isn’t to say that I don’t read and even enjoy some, just saying that there are few I really enjoy.

Please don’t take this to mean I am close minded or that this is a chance to school me (though I don’t mind suggestions, presented in a kindly manner.) on what I “should be reading”. I assure you, I read tons.

Anyhow, the point to this is, recently I was driving and started thinking of one of my favorite H.P. Lovecraft short stories. The Dark Brotherhood is a favorite of mine because it’s so, I don’t know, goofy. It was Lovecraft giving a tilt of the hat to Poe, it was aliens, it was “gothy”.

If you are unfamiliar, basically the story revolves around the Arthur Phillips and Rose Dexter who often walk together in the late hours of the night. One night they cross paths with a “Mr. Allen”. I don’t want to spoil the story for anyone that hasn’t read it so, I will just say that Mr. Allen has an interest in Edgar Allan Poe. Later it turns out that young Mr. Phillips and Mr. Allen and his “Brothers” also share an interest in astronomy.

I should stop with that because I am giving a terrible explanation and also don’t want to spoil the story for anyone.

Back to the point, eh? Years ago I wanted to adapt this story into a comic, but, well, I didn’t. I have a renewed interest in doing so now and think I may make this a project once things slow down a bit.

For now, I wanted to post a drawing I did quickly yesterday. Consider it a study in developing characters. For those that are familiar with the Dark Brotherhood story, it could be more. I don’t know. Either way, hope you like a little! 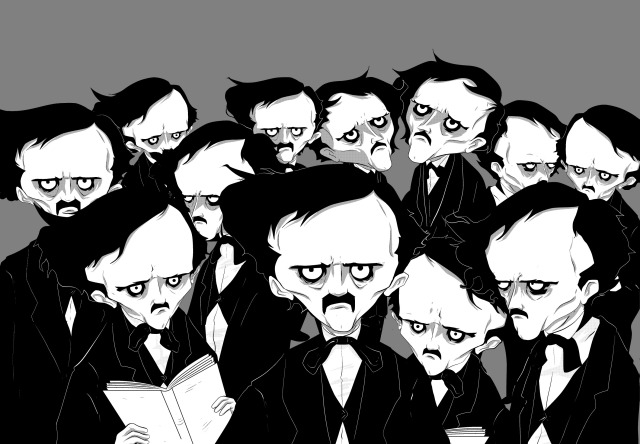 This is just a rough group of stuff. So there are plenty of goofs.

I am a freelance artist that has been drawing comics for about half my life. I try to work in all mediums that I possibly can but love working with a brush and a bottle of ink. If you like what you see here and need an artist for something, drop me a line.
View all posts by treebeerdy →
This entry was posted in Uncategorized and tagged art, comics, digital, Edgar Allen Poe, fiction, H.P. Lovecraft, horror, kelly williams, manga studio, novels, sci-fi, writing. Bookmark the permalink.